The Marquesas Islands are located in French Polynesia, an overseas land (domaine d’outre mer) of France.  They have their own territorial president and make their own laws, but their head of state is the president of France and the islands are partly administered by representatives of the French government (commissaires) at the national and regional levels.

This tiny group of twelve volcanic islands, six of which are inhabited, are divided neatly into two groups: Nuku Hiva, Ua Huka and Ua Pou in the north, and Hiva Oa, Tahuata and Fatu Hiva in the south.  The north-south distinction is common not only due to the physical distance between the two groups, but also to discrepancies in the Marquesan dialect and accent.  The six inhabited islands range in size from 27 to 131 square miles, and their current population is just under 10,000 people.  At least that many islanders currently live in the French Polynesian capital of Tahiti, having relocated their for jobs, family or other reasons. 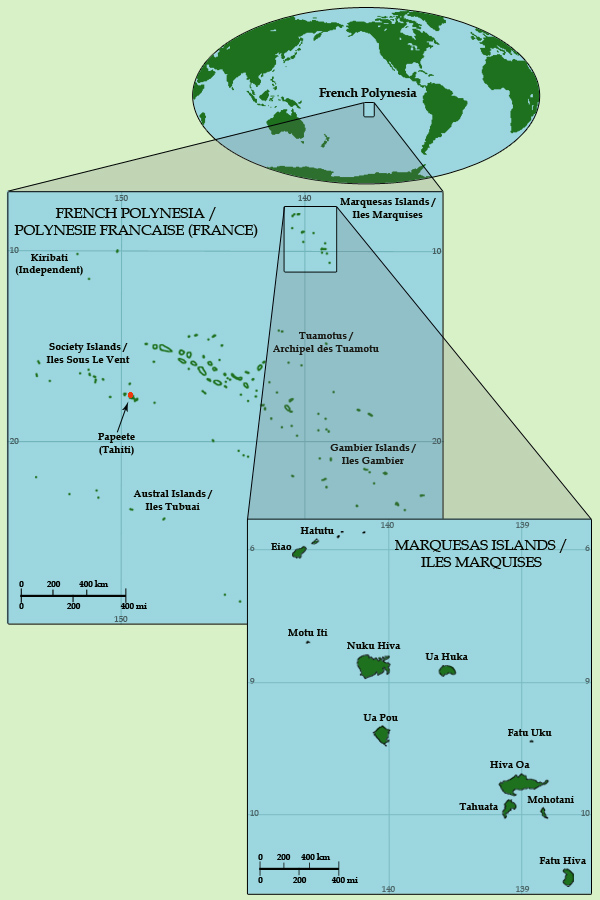 The islands were settled by Polynesian voyagers some time between 200 BC and 300 AD, depending on which archaeologist you ask.  The exact date remains up for discussion due to the ongoing excavations and occasionally unreliable nature of carbon (or Carbon-14) dates.  Europeans first arrived here in 1595, but the true floodgates of contact with the Western world opened in the late 1700s.  Explorers, whaling ships and other commercial traffic landed here often, since for many voyagers the islands are the first land fall after South America.  This remains true today, as each year hundreds of yachts drop anchor here for the first time since Panama.

Marquesan Islanders speak their native tongue, Marquesan, as well as French and, often, Tahitian.  On most villages except the three largest (Taiohae, Nuku Hiva; Hakahau, Ua Pou; and Atuona, Hiva Oa), they make their living from the land and sea.  Fishermen troll the deep sea using hand lines and spear fish off the rocky coral coasts; young men hunt wild goats and pigs in the mountainous forest and grassy uplands; farmers harvest coconuts and cultivate bananas, plantains, manioc, limes and myriad other fruits; women and men create masterpieces of indigenous art in the form of carvings, tattoos and barkcloth (tapa).

Life in the islands is remarkably peaceful, and leisurely pastimes include watching television, chatting outside the store, playing bingo and–most recently–spending time on Facebook.  Some visitors wonder of islanders, “What do they do?”  Not to be deceived, however: most Marquesans have a strong work ethic and support their immediate families with untiring time, love and labor.  Islanders are connected through complex networks of respect, reciprocal exchange and various levels of mutual obligation.  Meanwhile, each village has its own set of problems including small-town politics, corruption, domestic abuse, illness and theft.  It is a kind of paradise; but Marquesans are human!

As a group, they are also some of the warmest, most energetic people I know.  Their passion for life, generosity, family and the earth is inspirational.  I hope you enjoy this introduction to their beautiful language. 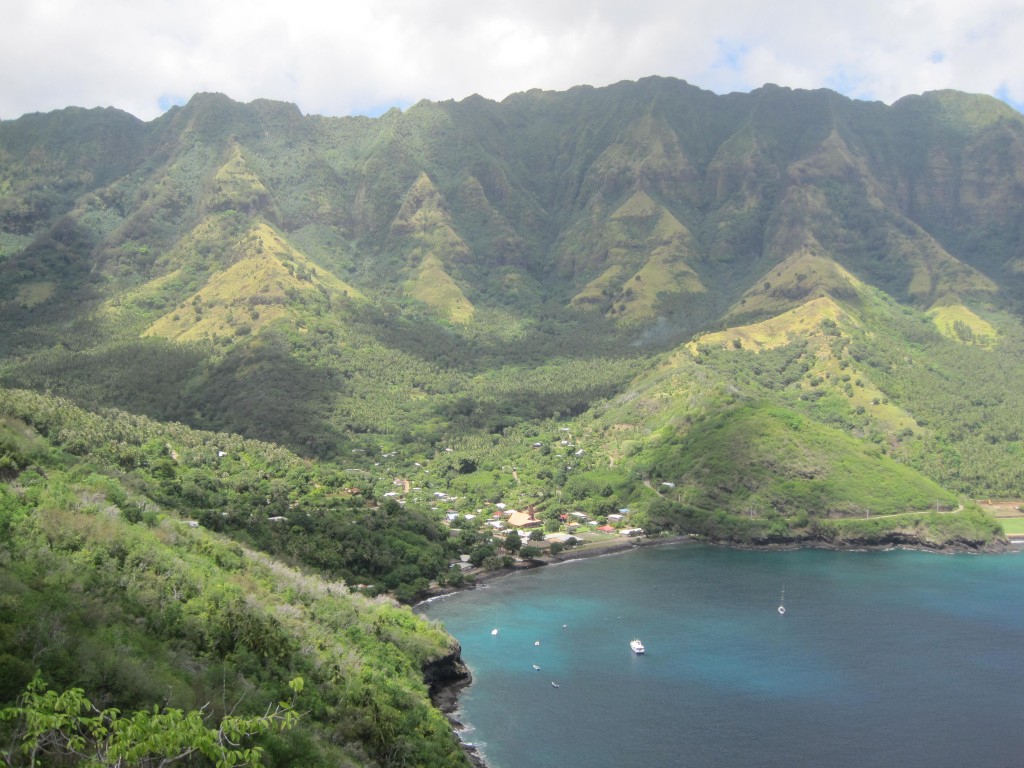 The village of Vaitahu, my “home” in the Marquesas.